This site uses cookies. By continuing to browse you are agreeing to our cookie policy. close
PING!
Gineceu + Estigma
The Gineceu & Estigma programme - whose epicentre is the Gardens of the Palácio de Cristal - aims to make people aware of new perspectives linked to the universe of Botany, through artistic creation and research into gender, politics and nature.
The programme includes conferences, workshops and interpretative courses on the botany of the garden, designed by researchers and guest artists, structured around two themes: Ecopensamento, which begins with ecocritical studies to foster discussion about new possibilities of interdependence between the natural, social and political domains; and Especulações Botânicas, in which questions are introduced that have been raised by artists about the science dedicated to the study of plants, such as the scientific nomenclature of species and recognition of empirical and popular knowledge about their healing powers. 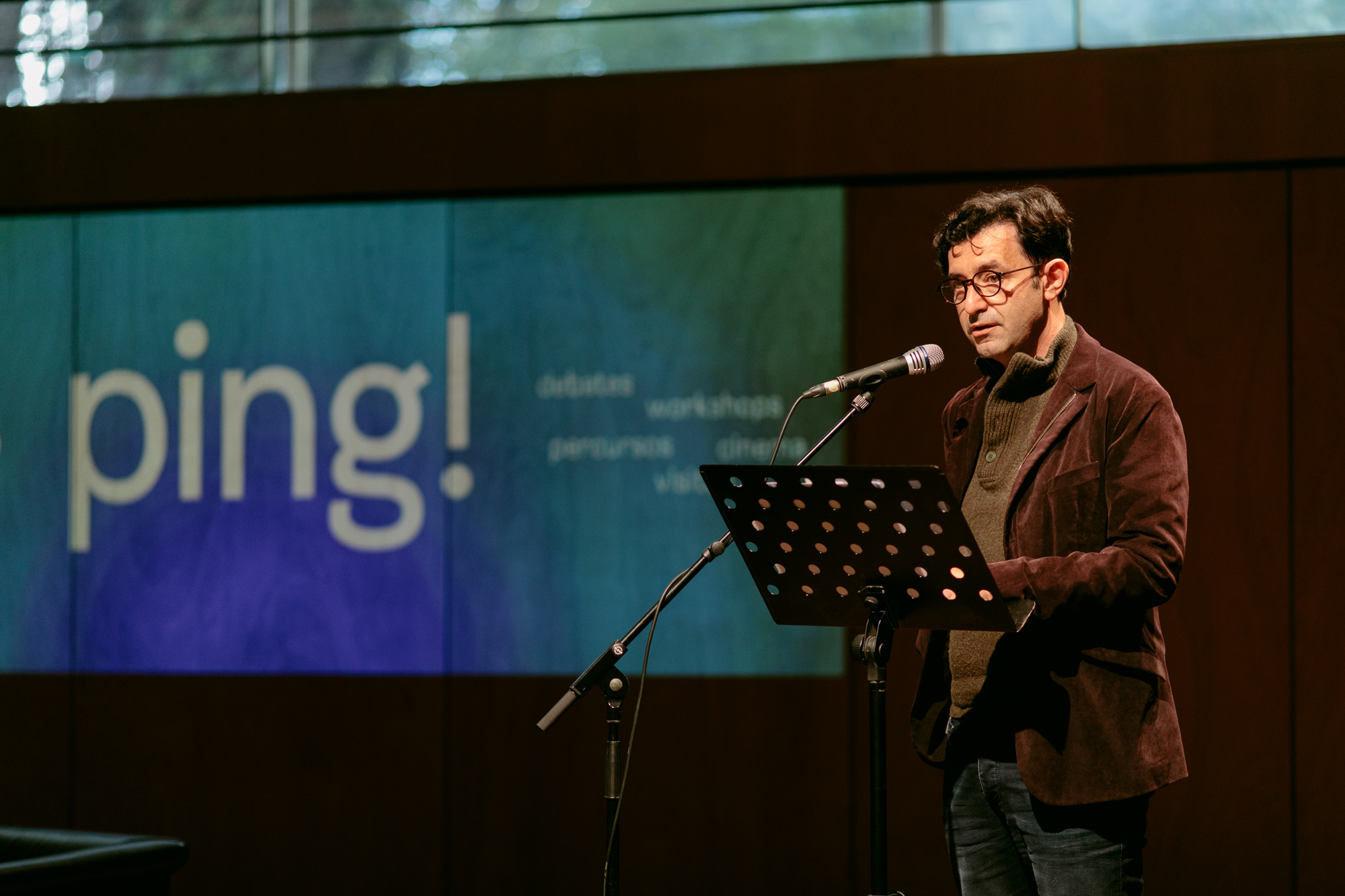 Michael Marder is Research Professor of Philosophy at the University of the Basque Country, UPV/EHU, Vitoria-Gasteiz. His work spans the fields of environmental philosophy and ecological thought, political theory, and phenomenology. Marder is associate editor of Telos magazine and author of 16 monographs, such as Dump Philosophy (2020), Political Categories (2019), Energy Dreams (2017), The Philosopher's Plant: An Intellectual Herbarium (2014) and Plant-Thinking: A Philosophy of Vegetal Life (2013).


Mariana Pestana is a Portuguese architect and curator. She co-founded the collective The Decorators, with whom she developed spatial interventions and performative situations in the public realm, with the aim to test alternative futures for specific places and people. She recently curated the 5th Istanbul Design Biennial and co-curated the exhibitions The Future Starts Here (Victoria and Albert Museum, UK, 2018) and Eco Visionaries: Art and Architecture After the Anthropocene (MAAT, Portugal, 2018; Matadero, Spain, 2019; and Royal Academy, UK, 2019). 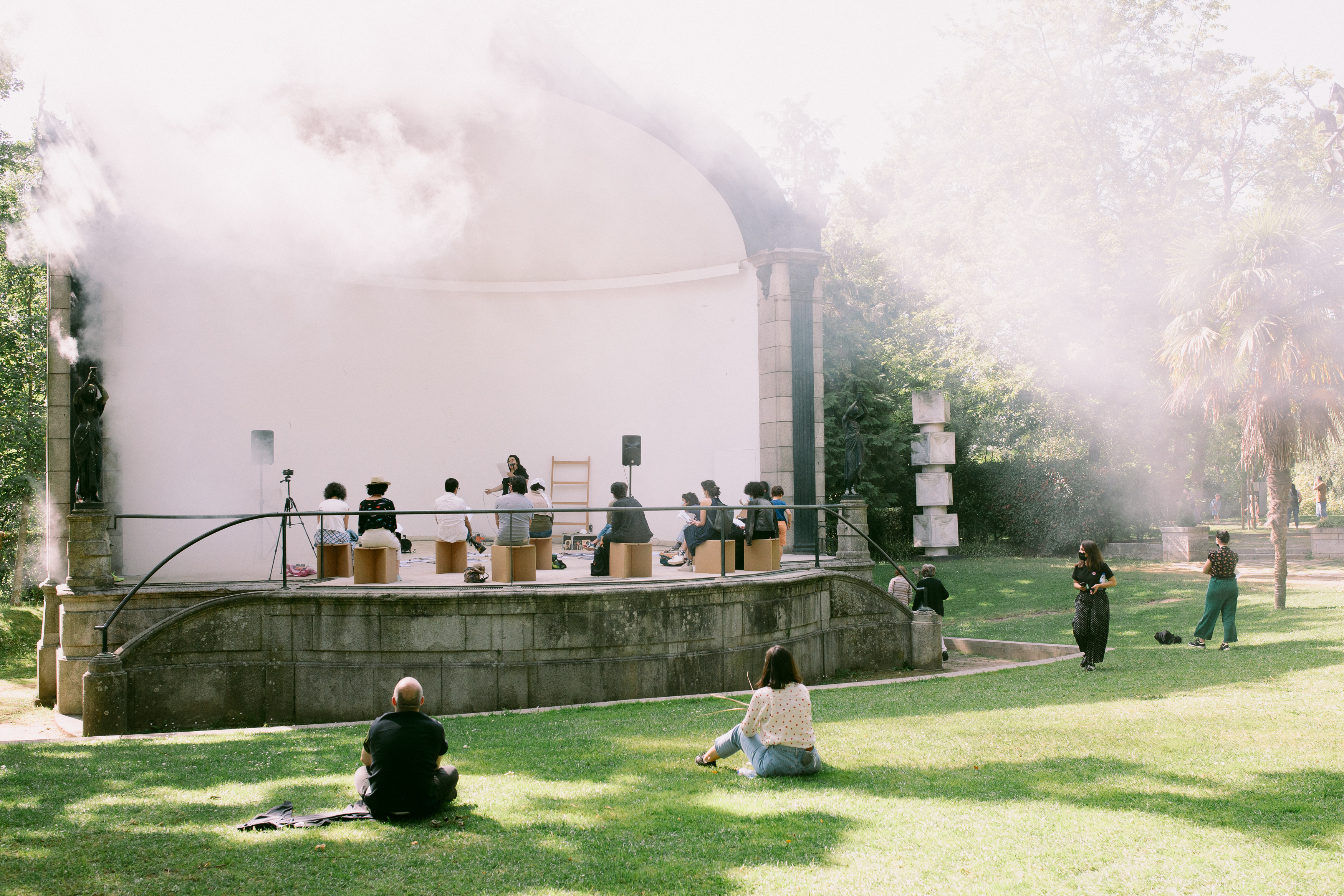 The trees, the roots, the flowers, the shells, the statues, the fountains, the walks, the silenced ones, the grass, the weeds, the peacock, the garden, the nature, the experience, the change, the justice, the renovation. The CLP's propose an animated reading of words, images, music, sounds, and other additives, which take root in the Acoustic Shell, but take us along the garden through three narratives, three different routes, which end up meeting and crossing paths. The common link is to bring down the statue-muses without a voice, stirring the bottom of the lake, and revealing the stories of women creators, literates, botanists, artists, singers. In the end, the dance is at the bottom of the sea around the shell.

The group Círculo das Leitoras Peripatéticas is comprised by Sofia Gonçalves, Susana Gaudêncio and Susana Pomba. In 2014, the artists attended a residency at the Moinho da Fonte Santa, in an isolated geographical area in the municipality of Alandroal, Alentejo, where they worked with materials from the Biberstein ‑ Gusmão Library to write a script that was read during a walk around the Moinho (water mill). This residency, entitled Elogio ao tempo lento, resulted in the first edition of the collective, composed of three ‘librettos’ presented as access routes to the library and its surrounding landscape.


To participate in the walk, prior registration is required.
The selection of participants will be made in order of registration, by e-mail galeriamunicipal@agoraporto.pt. 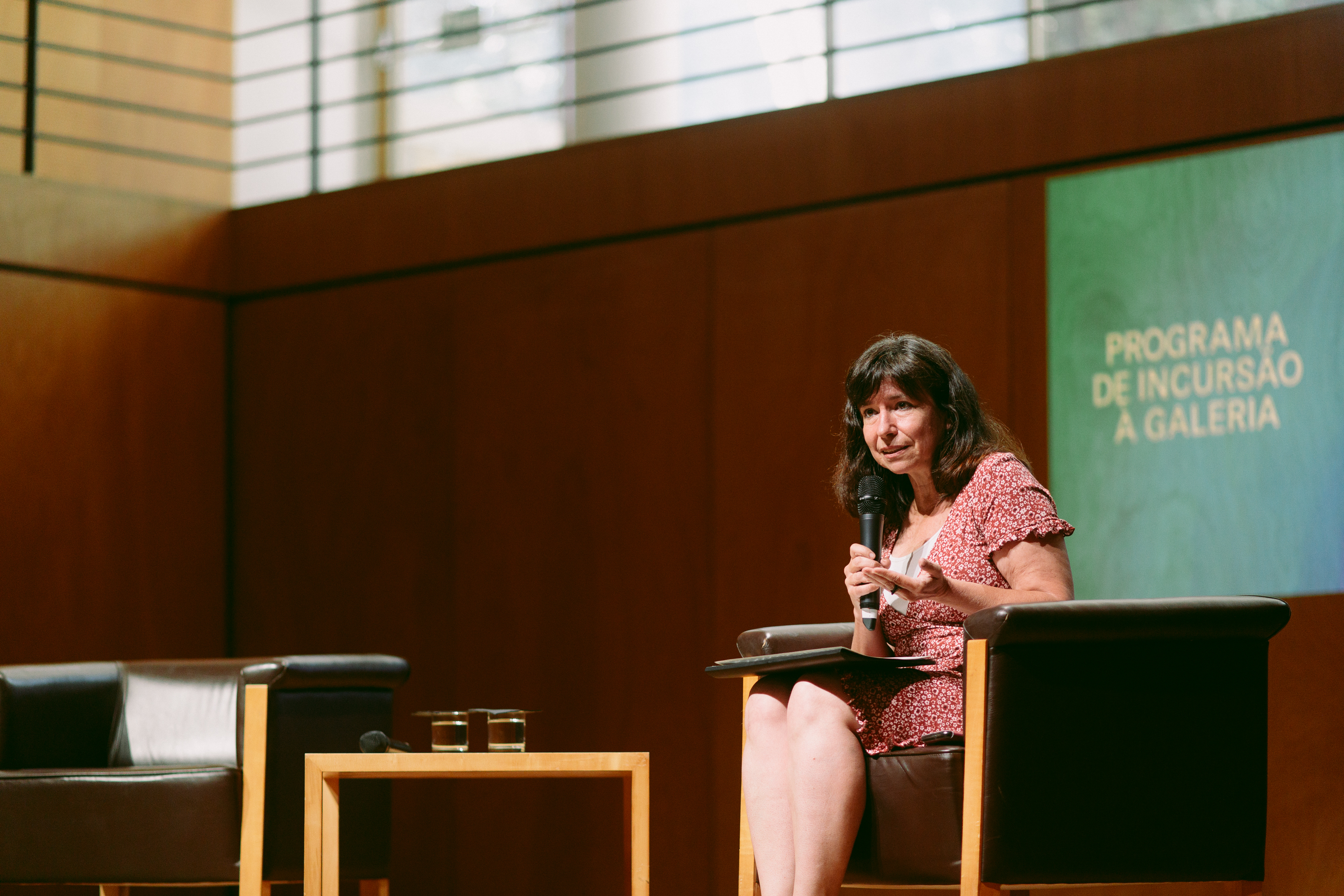 Yayo Herrero is a Spanish anthropologist, engineer, professor and activist known for her expertise in ecofeminism and ecosocialism at European level. She was the state coordinator of Ecologists in Action and has extensive experience in numerous social initiatives on human rights and social ecology. She is currently a professor at the National University of Distance Education and the general director of FUHEM.


Marta Lança is a Phd student on Artistic Studies at FCSH - Universidade Nova de Lisboa where she holds a postgraduate degree in Portuguese Literature. She has been working as a journalist, translator, editor and producer. In 2010, she created the BUALA portal. Recently she organised the meetings Sou esparça and massive liquidity: gestures of freedom (MAAT, Portugal, 2020) and Terra Batida: a network of art and science on socio-environmental conflicts (Festival Alkantara, Portugal, 2020), with Rita Natálio. 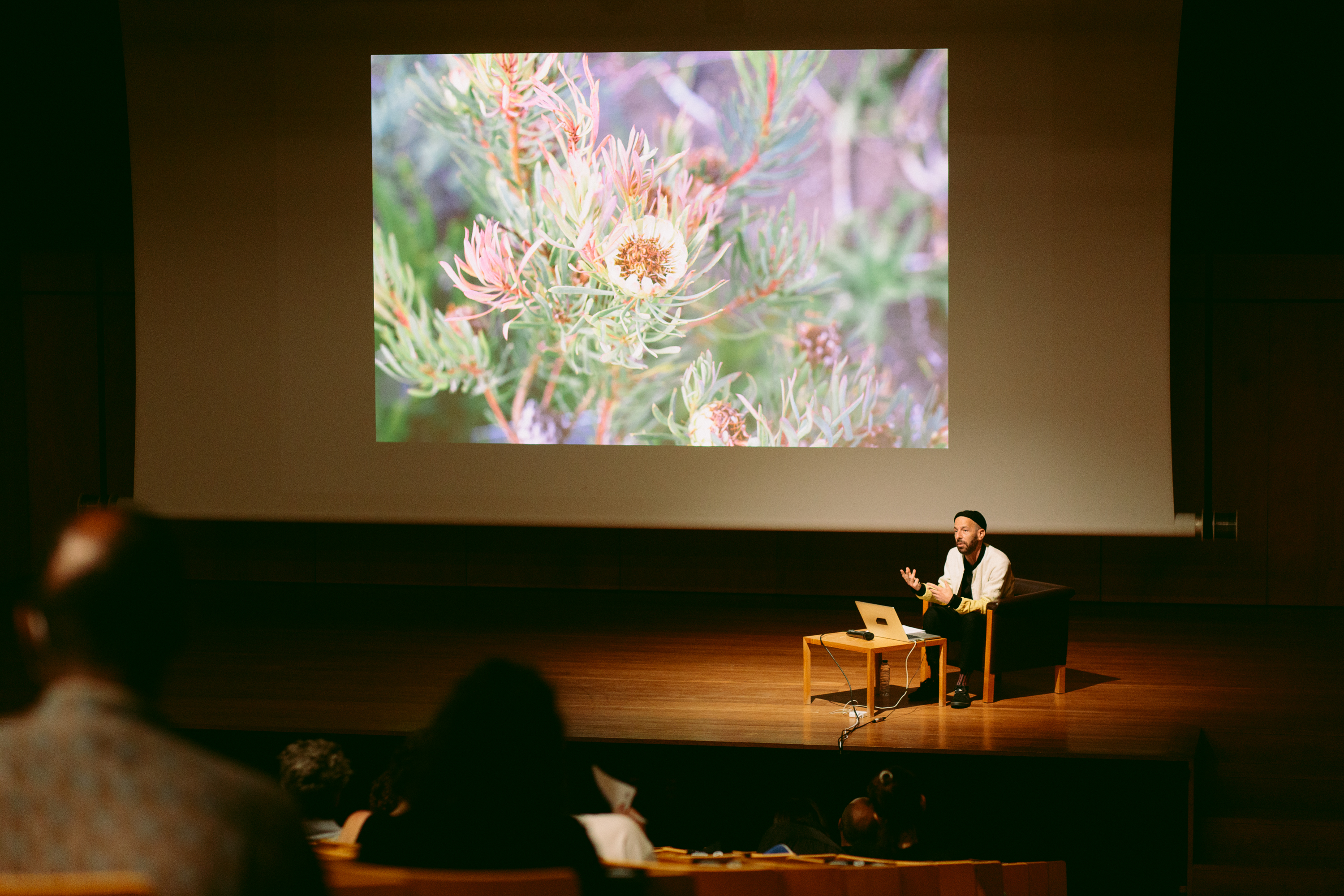 The artist Uriel Orlow will talk about some of his recent art projects which look to the botanical world as a stage for politics and history: trees as witnesses, the migration of flowers, botanical nationalism, gardens as tools of resistance, and medicinal plants testifying to neo-colonialism – these are some of the themes that Uriel Orlow has been engaging within his research-based art practice. The artist takes specific places and micro-histories as starting points for conversations about human plant entanglements and creates artworks in which plants are both narrators and protagonists.

Biblioteca Municipal Almeida Garrett auditorium.
The presentation will be held in English (simultaneous translation available in portuguese).
To participate in the presentation the free ticket must be collected (maximum 2 per person) up to 15 minutes before the event starts. Reservations can be made in advance by emailing galeriamunicipal@agoraporto.pt.
Photography: Renato Cruz Santos 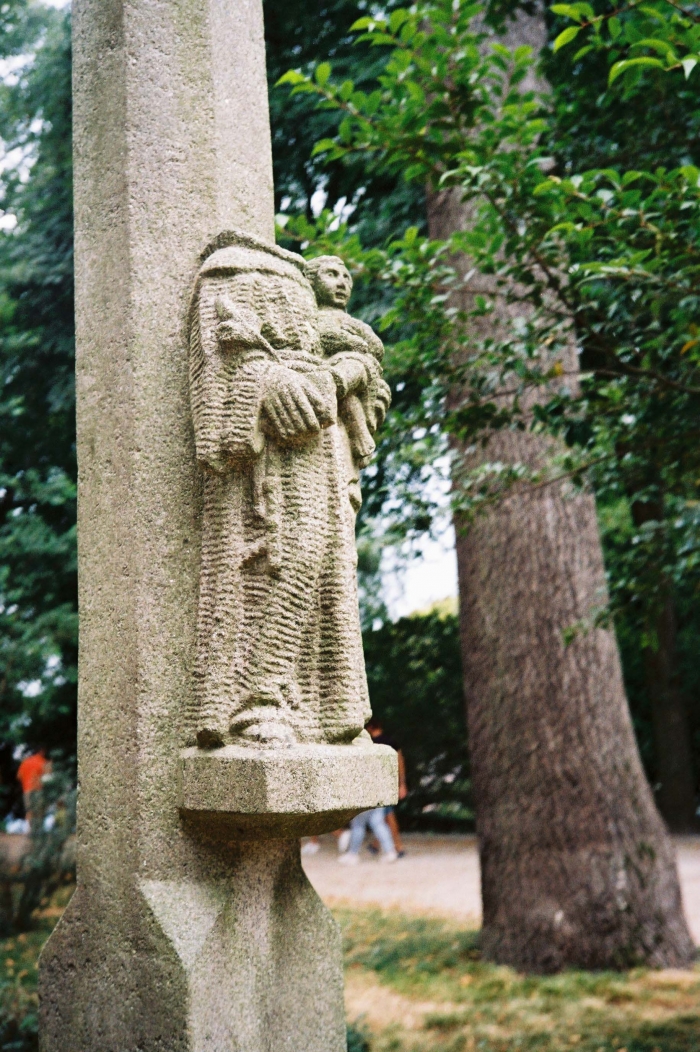 
Exoticism; Mini Zoo; Chico monkey; Sofala lion
old, always sleeping no longer delighted the children's fantasy with the grunting of the Jungle.
1910 opens the Monkey Cage. Sad with stench nearby
A vulture called Jorginho and other "monkeys" from the Palace
1993-08-28
Barons e Viscounts
The Agricultural Society of Porto


Dr. António Ferreira Braga, a great capitalist, would eventually die in the year 1870 in poverty for opening the coffers to make his dream come true – The Palácio de Cristal
Séc. XXI
Invasive plants: acacia
24-25 Peacocks
more males than females, contrary to the rooster
more roosters than chickens = 4 males + 2 females
sometimes disappear next to the nest, the food of a cat or seagulls
rats under control
Lakes without Natural life

With a degree in Fine Arts and a Master in Contemporary Artistic Practices from the Faculty of Fine Arts of the University of Porto, Carla Filipe started exhibiting in the early 2000s. She is a co-founder of the Salão Olímpico and Apêndice projects. In 2009, she received a grant from the Calouste Gulbenkian Foundation. Through an attentive look and a deep involvement with her surroundings, Carla Filipe seeks the basic elements that give meaning to the life of a specific community, building her work from the permeable relationship between art objects, popular culture and activism. Recently, she joined The 32nd Bienal – Live Uncertainty (São Paulo, Brazil, 2016), co-curated O ontem morreu hoje, o hoje morre amanhã (Galeria Municipal do Porto, Portugal, 2018) and held the solo exhibition Amanhã não há arte (MAAT, Portugal, 2019).
CIIMAR - Centro interdisciplinar de Investigação Marinha e Ambiental - is a scientific research and advanced training institution of the University of Porto. Its mission is to develop research of excellence, promote technological development and support public policies in the area of Marine and Environmental Sciences.
With a PhD in Biology and a postdoc in Science Communication, José Teixeira is the coordinator of the CIIMAR Communication Office since 2014. Among other tasks, he is responsible for the development and implementation of ocean literacy projects and coordinator of the Charcos com Vida Campaign .
Marisa Naia is a biologist and holds a master's degree in Biodiversity, Genetics and Evolution from the Universidade do Porto. She is currently a member of the Communication Office CIIMAR where she performs communication functions in the PONDERFUL and Charcos com Vida projects.


To participate in the walk, prior registration is required.
The selection of participants will be made in order of registration, by e-mailing galeriamunicipal@agoraporto.pt. 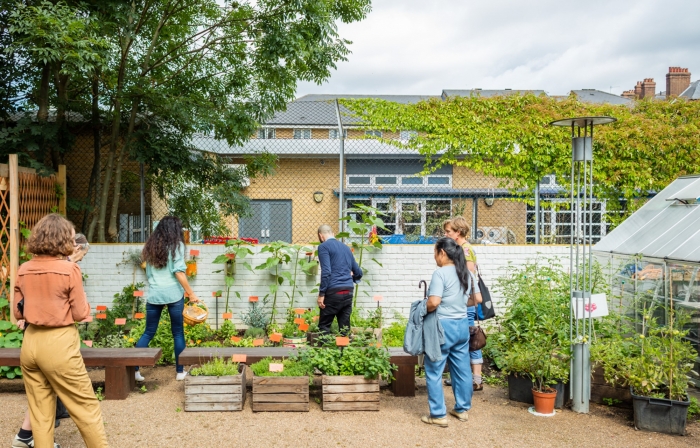 This workshop is the result of a research residency that the artist carried out in the Gardens of Palácio de Cristal, to give rise to an interpretation of the political, healing and historical implications of the relationship between humans and plants. It will consist of two connected moments.

The session also counted with the participation of Fernanda Botelho and the Landra project, composed by Sara Rodrigues and Rodrigo B. Camacho.

The practice of the multidisciplinary researcher and artist Uriel Orlow integrates film, photography, drawing and sound and has focused especially on themes such as the residues of colonialism, the spatial manifestations of memory, and the botanical world as a political stage. His work has been exhibited in several internationally recognized institutions, such as Tate Modern (United Kingdom), Palais de Tokyo (France), Kunsthaus Zürich and Center d’Art Contemporain Genève (Switzerland). He has published three monographs — Conversing with Leaves (2020), Soil Affinities (2019) and Theatrum Botanicum (2018) — and currently teaches at the University of Westminster, the Royal College of Art (United Kingdom) and the Zurich University of the Arts (Switzerland).


Fernanda Botelho is a specialist in wild plants, namely in their medicinal and culinary uses. She lived for 17 years in England where she studied Botany, Phytotherapy and Pedagogy, having studied medicinal plants at the Scottish School of Herbal Medicine (1997). She is a collaborator of the Eco-Escolas programme and author of a collection of children's books, namely “Salada de Flores” (2011), “Sementes à Solta (2013)” and “Hortas Aromáticas” (2016). She also wrote “As plantas e a saúde” (2013), “Uma mão cheia de plantas que curam – 55 espécies espontâneas em Portugal” (2016) and the recently released “Ervas que se comem” (2021). She is co-author of “O meu primeiro Herbário de Plantas Medicinais” (2017) and “Cosmética Natural” (2020). Botelho publishes annually, since 2010, a programme of Medicinal Plants and organizes guided walks and plant recognition workshops at the invitation of various entities. She regularly contributes about medicinal plants to RTP's television programmes, as well as to several magazines and dedicated websites.
Sara Rodrigues and Rodrigo B. Camacho are interdisciplinary artists and creators of the Landra project, an oak grove and agro-forest under development in a valley at the foot of Serra da Cabreira. In addition to serving as a residence, it is also a center for research and education in regenerative cultures, sustainable energy and non-institutional art. Landra is the name given to the acorns from Minho to Galicia and refers to a culture of subsistence and autonomy, where once the fruits of the oaks offered food to the populations, in addition to improving the land and its ecosystems, year after year.
More information about the project at www.landra.pt.


To participate in the workshop, prior registration is required.
The selection of participants will be made in order of registration, by e-mail galeriamunicipal@agoraporto.pt. 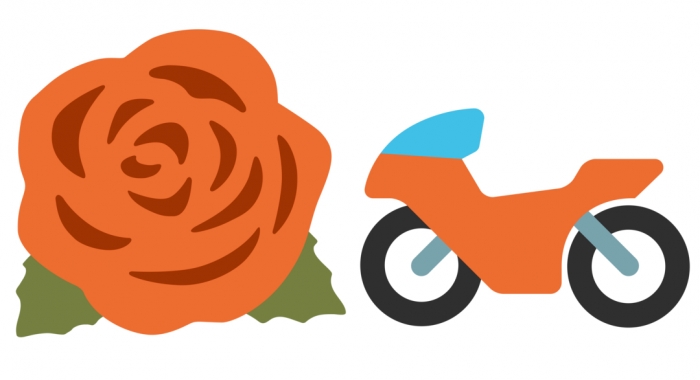 Walk along the gardens with Von Calhau!

Due to a storm, scheduled for the night of October 30, 2021, it was not possible to fulfill the walk.
Therefore, remains the possibility of doing it in person or virtually.
Online guided version available here.

Printed version available on the balcony of GMP.

Von Calhau! is the name that conceals all musical and visual projects of Portuguese duo Marta  ngela and João Alves, worked out together since 2006. Their recent public presentations include performances, concerts, movie projections, exhibitions, radio programs and workshops at different venues such as Atelier MTK (France), ZDB Gallery and Museu de Serralves (Portugal) and more recently Residency Unlimited (USA).

Access to the audio requires the use of an electronic device with internet (mobile phone, tablet) and the use of headphones is recommended (equipment not provided by GMP).