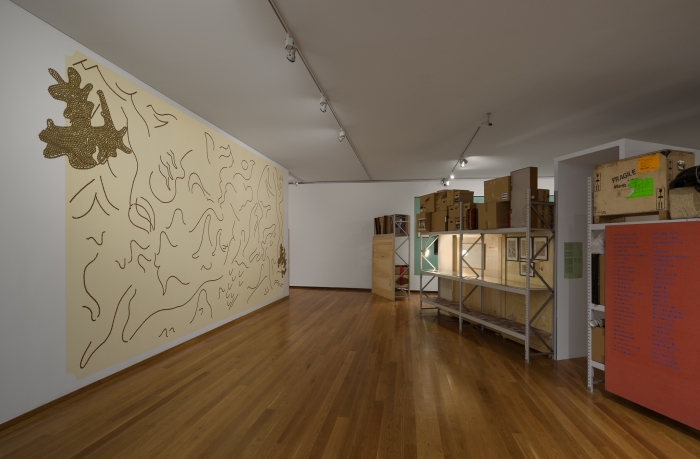 The exhibition Que horas são que horas: uma galeria de histórias is the result of an invitation made by the Galeria Municipal do Porto to three curators to reflect upon the historical landscape of Porto’s art galleries – inscribed between the apparent post-WWII cultural opening and the retraction of the cultural sector after the recent economic crisis. Looking at this time period enables us to understand the many different sides of the civitas, and the transformative complicities that exist between the city’s artists, cultural agents and audiences that shape it.

This retrospective portrait comprises independent exhibitions in bookshops, which explored an alternative professional approach to the art world; it recalls the confrontation with new audiences and civic spaces that only became possible after the 1974 revolution and the celebration of simultaneous inaugurations in galleries in the Rua Miguel Bombarda that followed; finally culminating with the network of alternative venues created to resist the Troika.

Either against the regime or supported by it, in an institutional vacuum or filling up museums, and heir of a conservative social context which had no critical discourse and resisted the inscription of new generations of artists, the historical landscape of Porto’s art galleries is composed by citizenship and commerce, and by art that has both cult value and exchange value: a gallery of stories. 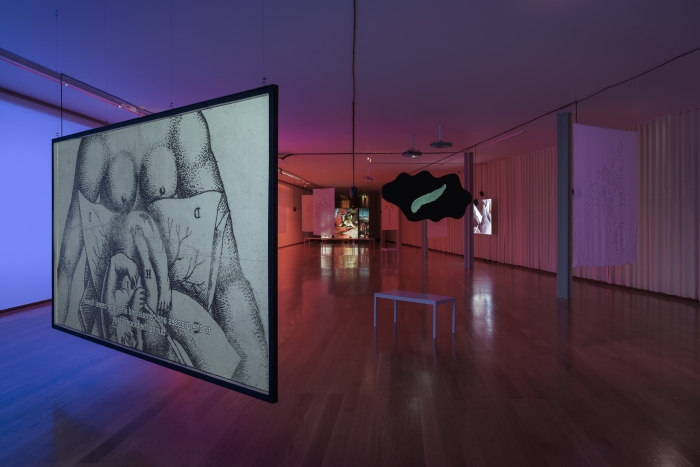 Convulsions, hallucinations, burning sensations. The ergot parasite infecting rye plants is known to be the cause of the St. Anthony’s fire disease. In small doses, ergot has traditionally been used by women healers for abortions. However, their knowledge rooted in experience of the land and plants has been eradicated by the progress of patriarchal capitalism, replacing it with obstetrics. Historians today still speculate whether ergotism may have played a role in accusations of witchcraft against women in the Salem crisis in 1692, as well as against Sámi shamans in the Finnmark trials in 1621, and other instances.

Diana Policarpo’s exhibition Nets of Hyphae, curated by Stefanie Hessler (Director of Kunsthall Trondheim), draws speculative connections between ergot fungi networks and women’s health. Her newly commissioned video works, animation, textiles and soundscape create parallels between the fungus cycle, reproductive justice and the expertise of midwives, healers and peasants in precarity and resistance. Homing in on feminist perspectives on psychedelics and working with the transfeminist biohacker Paula Pin, Policarpo draws speculative parallels between ergotism, the suppression of ancestral knowledge and health justice. 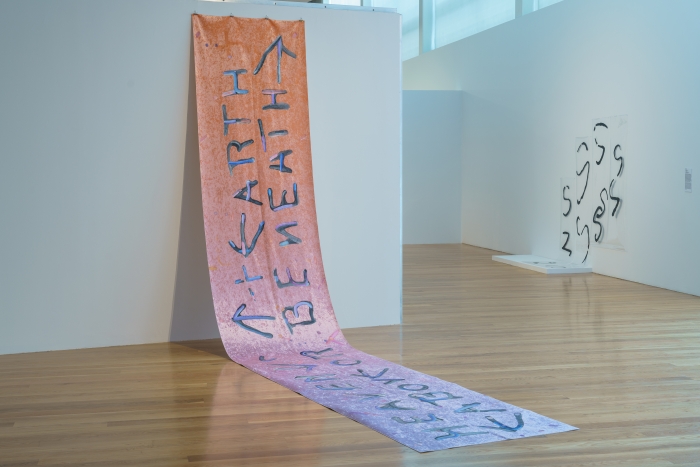 The Paulo Cunha e Silva Art Prize was created by Porto City Council as a tribute to the former Councillor for Culture, Paulo Cunha e Silva, and is aimed at artists under 40 years of age. The jury of the second edition of the award – Isabel Lewis, John Akomfrah, Margarida Mendes and Shumon Basar – analysed the portfolios of 48 artists selected by a group of 16 curators appointed by the jury members. Lastly, the four jury members chose six finalists, from different cultural geographies and with very different artistic practices. The jury explained that the artists’ voices articulate the current situation and things to come, and moved them through their beauty, tenderness, political speculation or simply their magic. The winner will be announced during the exhibition. 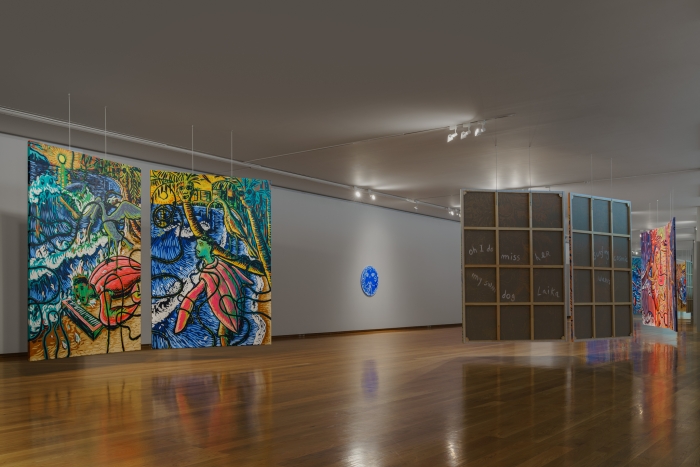 Inspired by the triangular shape of the mezzanine of the Galeria Municipal do Porto as a potential metaphor for the Bermuda Triangle, Luís Lázaro Matos’ new series of works takes us to a whirlwind of suspended images in space.
Curated by Martha Kirszenbaum (curator of the French Pavilion at the 58th Venice Biennale, 2019), the starting point of the exhibition project is the artist’s fascination with the mythology of the sea. Music appears at the core of his practice, and the seven diptych paintings in the exhibition are inspired by the seven songs of his recently released album, also named Waves and Whirlpools.
The pictorial and musical compositions consist in a superimposition of layers of paint and sounds, and invite the viewers to immerse themselves in a mystical, romantic and troubling universe, underpinned by an ultimate fantasy of dominating the ocean and its uncontrollable waves.
__

For his solo presentation at the Galeria Municipal of Porto, Lisbon-based artist Luís Lázaro Matos (b. 1987) – whose practice spans painting, drawing, music, and performance – has created a new ensemble of seven diptych paintings, inspired by seven recently released songs, and conveying references to the mythology of the sea.

Matos depicts intriguing surroundings of dark blue waves and smiling cartoonish palm trees, haunted by fantastic marine creatures, such as sea turtles, manta rays, octopuses, whales, but also birds and an Astronaut dog named Laika. The iconography he displays might recall the imaginary realism of Portuguese artist, Paula Rego, whose interpretation of fairytales grew into an important source of inspiration for his approach. A recurrent persona portrayed throughout the exhibition is an allegorical self-portrait of a musician transformed into a sea turtle, who serenades an Egyptian character, in a scene that echoes the Exodus and the parting of the Red Sea, thus expressing the ultimate fantasy to have power over the ocean and its incontrollable waves and currents. Finally, Matos has outlined mysterious aliens, reflecting his fascination for conspiracy theories and the Bermuda Triangle, a source of inspiration for this project that is also expressed in the architectural shape of the exhibition space.

Each painting comprises a long black rope that seems to interlace and connect all the works, as it figures an Ariadne’s thread, in the shape of an audio jack, reminding us that music appears at the deep core of Luís Lázaro Matos’ work. For this particular series, he has composed seven tracks of lively noise-punk, stylistically inspired by the compositions of the American band, Sonic Youth. The lyrics and titles of each song address and elucidate the themes developed in his painting series: Red Sea, Whirlpools, Laika Surfing Cosmic Waves and Tsunami, among others. In his musical compositions, the arrangement technique consists of layering different instruments, a method also used in his paintings, by applying numerous layers and undercoats of paint. The storytelling behind his canvases is punctuated by the occurrence of several musical instruments (guitars, keyboards or microphones) and their presence resonates with a visual realm that is profoundly mystical, romantic and troubling. 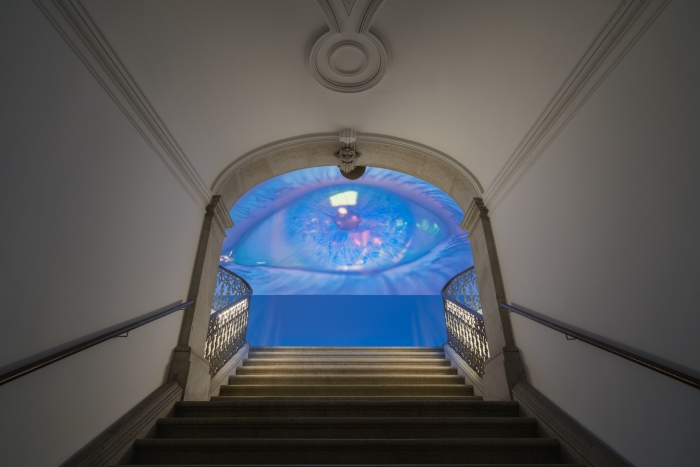 Anuário is an exhibition and, simultaneously, a project of reflective analysis of curatorial and artistic practices in Porto during a one year period. This project – included in the platform Pláka, which encompasses the city council’s policies in support of contemporary art – was created by João Ribas and Guilherme Blanc and is annually developed by a group of five curators who they invite to monitor, document and analyse artistic projects presented in public spaces in the city. This is an exhibition that results from a continuous reflection on artistic production and a shared curatorial process, in which the five curators’ perspectives converge into a common understanding of the art practice in Porto over the last year. 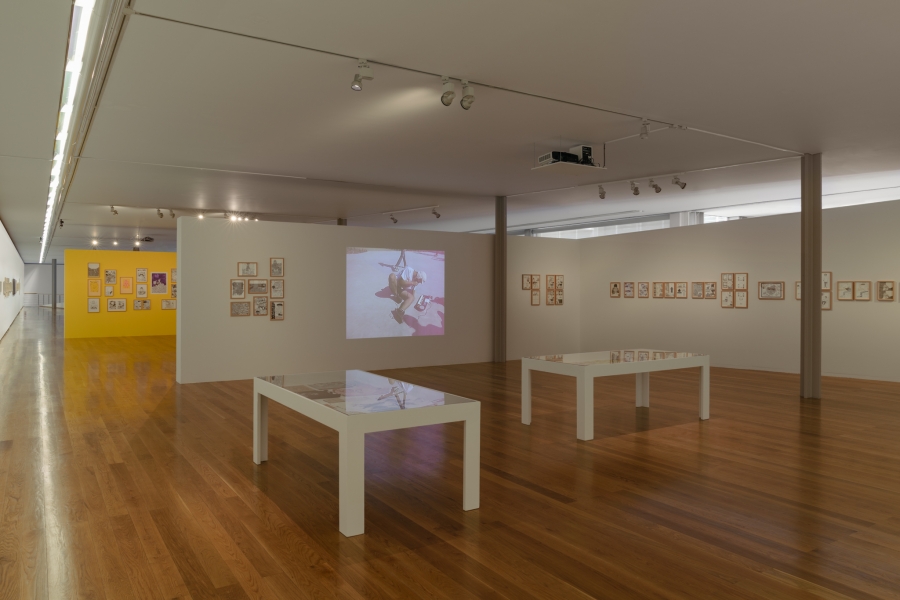 Diogo Jesus has produced drawings, writing, comics and music under various pseudonyms for over a decade. Self‑publishing and editing fanzines and music at the age of 16 as RUDOLFO, he has created over 40 independent publications and participated in various anthologies of comics in Portugal and abroad, as well as collaborating with a variety of artists, musicians, and writers. Curated by João Ribas (former director of the Serralves Museum and curator of the Portugal Pavilion at the 58th Venice Biennale, 2019), the exhibition features the artist’s autobiographical obsessions and distinct take on popular culture. The cast of people, mutants, aliens, and everything in between found in his drawings and comics provide an ongoing commentary on questions of creativity, gender and masculinity, and the conditions of making art, while pushing the boundaries of the genres of the comic book. Apesar de não estar, estou muito collects drawings, objects, videos, and writings from a variety of the artist’s projects and publications since 2007, from his first independently published underground comics, to his recent projects as DJ Nobita and Gekiga Warlord, all defined as much by sardonic humour as eviscerating honesty. 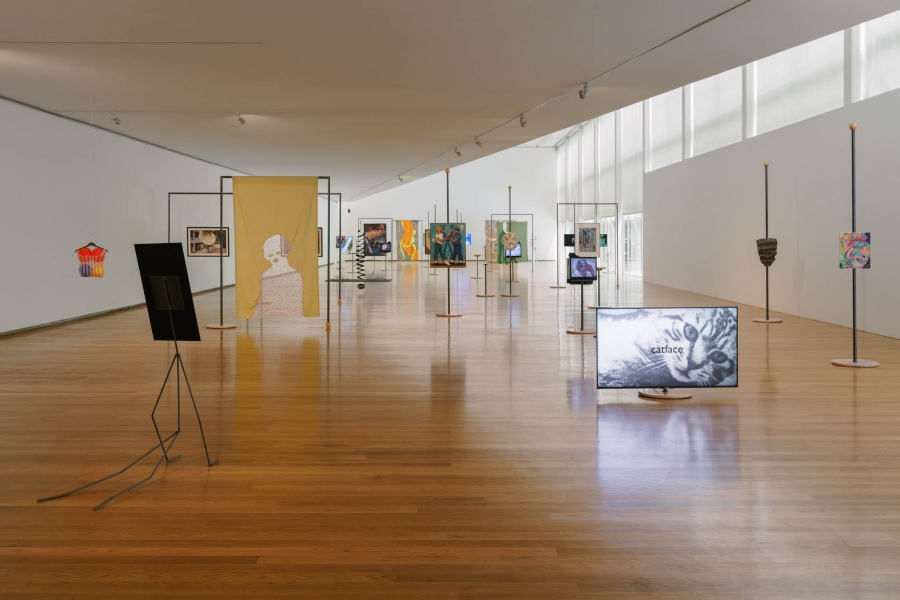 Masks have a longstanding place in the history of societies. As a symptom of a time of extreme change, masking techniques have gained a renewed traction and urgency, materialising in a number of guises. From online avatars used for activism, entertainment or propaganda, to different dynamics that empty or occupy our streets, our everyday ritualised life is now filled with practices of caricature, camouflage, disguise, face-swapping, masquerade, mimicry, protection, ridicule, social makeup and transformation, among others. João Laia (chief curator of exhibitions at Kiasma Museum of Contemporary Art) and Valentinas Klimašauskas (curator and writer, co-curator of the Latvian Pavilion at the 58th Venice Biennale, 2019) propose a look into the ongoing radical reshaping of our multiple historical, sociopolitical, sexual and transcendental identities, inquiring about the current processes in which we shape-shift from one to the other.